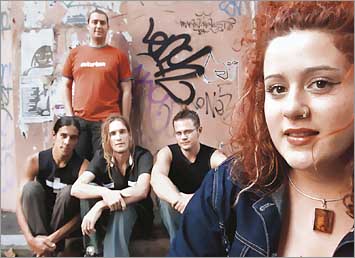 Originally formed in 1996 to enter a university music competition, Brisbane rock band George later went on to become one of only ten Australian artists to have their first album debut at No. 1. Made up of siblings Katie and Tyrone Noonan, as well as Geoff Green, Paulie Bromley and Nick Stewart, the band gained a strong following in Australia during their eight years together.

George released a string of independent EPs (George, You Can Take What’s Mine and Bastard Son/Holiday) before signing to Festival Mushroom Records in 2001. The first single to be released under the new label was Special Ones, followed by Run, Breathe In Now and Breaking It Slowly – all songs from their debut album Polyserena. Polyserena was released in 2002, debuting at No. 1 in the national album charts in its first week. The album received gold status, then platinum, and by the end of 2002 it had reached double platinum status and spent 36 weeks in the Top 50. Impressive!

After heavily touring their first album, the band went back to the studio to record their second album Unity which was released in 2004. Lead singer Katie said the album was a reflection of the band’s remaining closeness throughout their recent period of change and growth. The album debuted at No. 5. George’s final performance before they disbanded was in January 2005 at the Sydney Opera House forecourt. At present all members are still pursuing individual projects, but a George reunion hasn’t been ruled out!

Relive the greatness by pressing play on their first single Special Ones from Polyserena below.

Watch ‘Special Ones’ By George: