Review: From Inflatable Couches To Local Sounds – Maroochy Music & Visual Arts Festival Was A Vibrant Experience All Round (PART I) 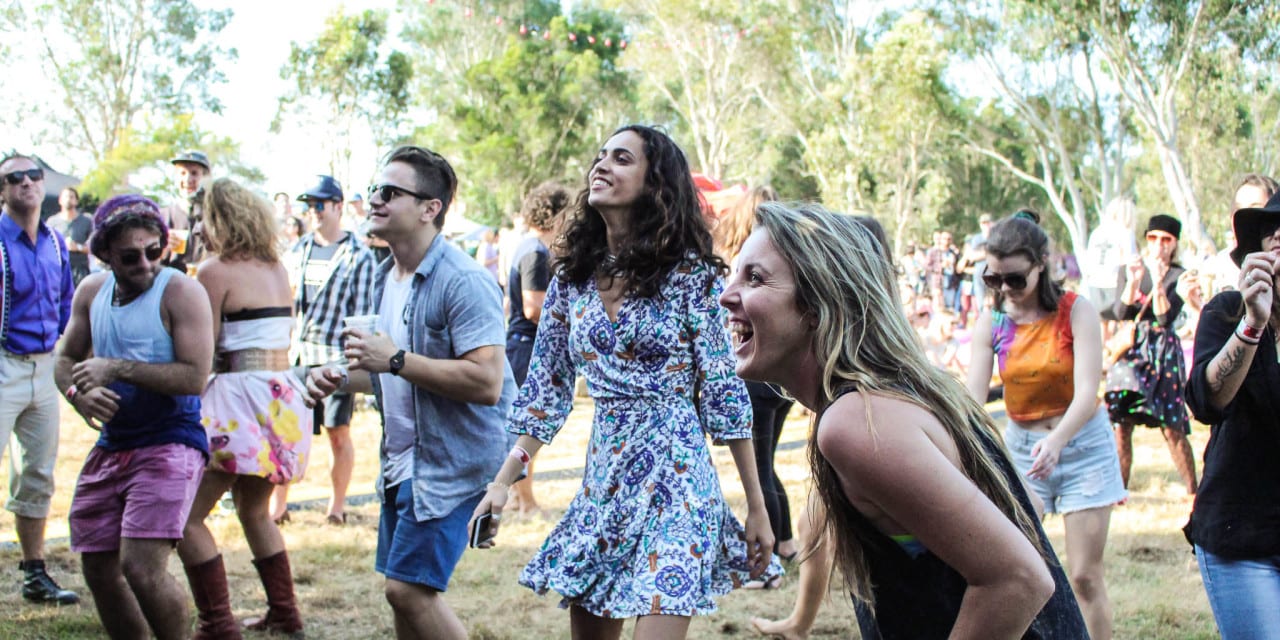 Attending Maroochy Music & Visual Arts Festival (MMVAF) last month was like stepping into another world. Hidden away in a golf course oasis in the middle of Maroochydore suburbia, the festival brought together some of Australia’s hottest musical talents and local up-and-coming acts.

Walking down the dirt track and in through the festival gates, we made a beeline for the Champagne & Oyster stage where a majority of the acts were Queensland natives. We immediately spotted hot pink, lip-shaped inflatable couches scattered in the audience area and synchronised our landing on them, only to fall flat on our arses when it burst beneath us (sorry MMVAF…MIMM team did accidentally break one of your inflatables). A pretty wicked way to start the day! Now moving on…

The first act we had the pleasure of seeing was Sunshine Coast jazz, funk and soul trio Sommer Rd. Their sound was a very cool fusion of jazz elements and some funk, borderline-reggae type grooves that one minute transported you to a jazz bar, and the next left you feeling like you were chilling on the beach of your own private Caribbean island. Their songs about tunnel vision, rainy days and the energetic conclusion In Da Funk were invigorating. If you get a chance to see this trio, make sure you do – you won’t regret it!

Second in-line and giving us all serious multi-instrumentalist envy with his maestro-level guitar, vocal and digeridoo skills, was one-man-band Chris Flaskas. Combining roots, folk and alternative flavours, Chris delivered his own “earth rock” blend which began with instrumental opener The Journey Home, which at times, with the digeridoo and guitar responses, sounded like ocean murmurs. With tracks like Reflections, I Believe and When The Gold Is Gone, Chris’ musical storytelling provided the perfect environment to sit back, relax and ponder life. He played a bunch of songs from his latest EP, which fans of Xavier Rudd and John Butler would appreciate.

Next up was Juju Bom, whose lead singer Janae immediately commanded everyone’s attention with her powerhouse, Amy Winehouse-esque vocals. With mellow, laidback instrumentals and smooth as wine vocals Juju Bom conveyed witty and whimsical lyrical messages. Although this was their first show together, they delivered a tight set, putting them on par with bands who have played together for years. A gripping live debut!

Before breaking for lunch we had our musical hunger satiated by soloist Christian Patey. Blending folk-style vocals with sweeping electronica sounds, Christian’s set was enchanting. He played a mixture of his own original tunes along with a Jack Garrett cover which really accentuated his voice and his ability to convey emotions powerfully. He also played a slow instrumental piece mid-set which was captivating and felt very zen.

Even at this halfway point in our schedule, we already knew Maroochy Music Visual Arts Festival had struck musical gold!

Relive the magic of MMVAF through our lens, CHECK OUT OUR MMVAF HAPPY SNAPS GALLERY.