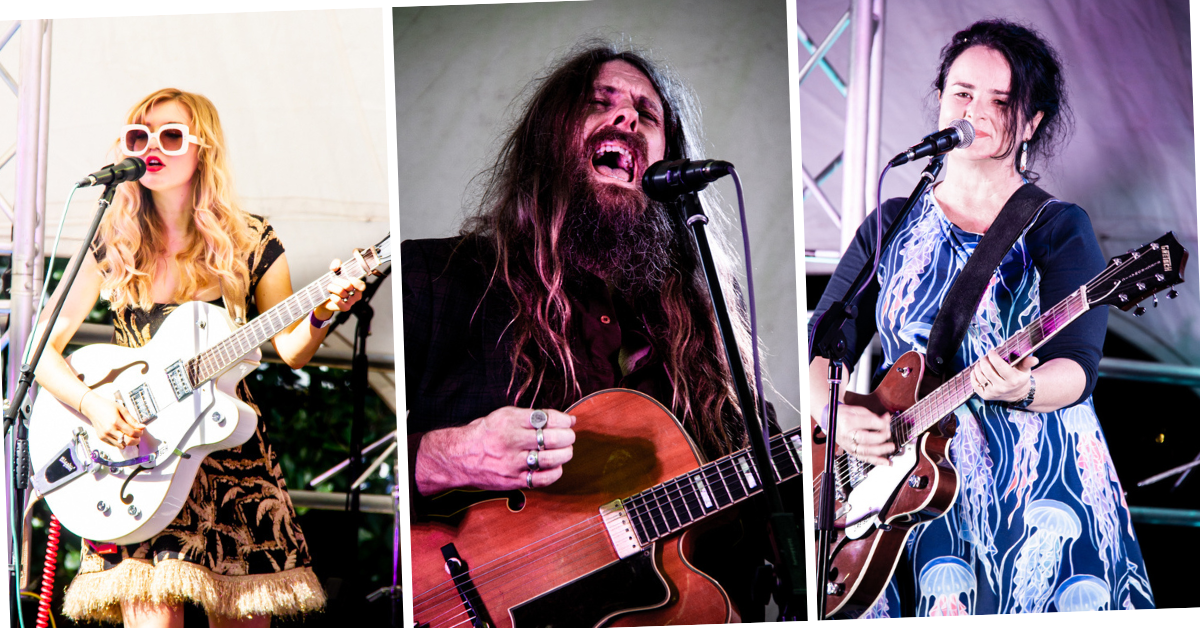 As people have just been able to appreciate live music in its many states over the past few months, the rewarding experience of sharing live music as a community is a known rare luxury. With the ominous feeling of lockdown never being too far away from the minds of many, festivals have been one of the most contentious events during the coronavirus pandemic. The logistics of organising a festival is a tough process, and even that can be dependent on the right environmental circumstances to ensure a successful event. This is an important part of why the very first Coochiemudlo Island Festival, held on 8 May 2021, was such a resounding success in its unique and powerful experience.

As all participants boarded a brief, but beautiful ferry ride from Victoria Point on Brisbane’s southside unto the shore of Coochiemudlo, there was an immediate charm to the isolation, and comfort in the welcoming hospitality. The event took place in Mudlo Gardens just next to the ferry terminal, so the very moment punters took their first steps off the boat they were welcomed to the vibrant sounds of the day.

Kicking off the festival was Coochiemudlo-based band, Red Belly Black. The trio performed a selection of cover songs that suited the relaxed vibes of the island well. Songs performed included 7 Seconds by Youssou N’Dour ft. Neneh Cherry, and Gotye and Kimbra’s infamous Somebody That I Used To Know. The highlight was definitely their rendition of These Boots Were Made For Walkin’ which had audience members up dancing, setting the tone for a carefree day of fun, sun and sound.

Next to take to the stage was Brisbane belle Ruby Gilbert. Delighting the festival crowd that soon packed out the small amphitheatre with camping chairs and picnic rugs, the enchanting country-rock songstress carried beautiful lyrics amidst a background of western twang and soulful melodies that instantly wowed punters. Wearing possibly the coolest gold, sparkly dress our team has ever seen, the songwriter and guitarist played a myriad of tracks, including a great performance of her 2018 song Cold Hearted Killers and her newest single No Vacancy. Accompanied by her band, Ruby Gilbert put on a fantastic set of bluesy, toe-tapping tracks.

Following Ruby’s resounding performance, dazzling octet The Holy Rollercoasters warmed the crowd further with their extensive brass section and seemingly unlimited amount of talent. At Coochiemudlo Island Festival, they were spilling off the stage, but that did not stop them from delivering an incredibly funky and polished performance. From the very first note through to their closer, Bathe In The Blood of The Lamb, the band delivered a high-energy performance that pumped up the crowd.

Fans were then graced with some local pop-rock royalty in the form of Adele & The Chandeliers. The band features Adele Pickvance from The Go-Betweens on bass and lead vocals, Scott Mercer on guitar, and Jonny Pickvance on drums. The trio played tracks from their debut album including Looking For Something, German On My Mind, and Swimming With Sharks with many kids up the front dancing along to the jangly-pop bops. Adele asked who in the audience liked birds, before closing the set with what seemed to be a new song. The band’s sound reminded many of the original rock and roll heritage that founded such a vibrant and constantly evolving scene here in Brisbane; simultaneously exposing a new generation to this history in the modern era.

In a perfect segue, this current culture can be seen in one of its best forms in the one and only Karl S. Williams. Having just been awarded a Queensland Music Award the week of, there was no better time to celebrate the blues artist and his incandescent music. Joined by his band, the sun began to set over the picturesque gardens of Coochiemudlo to the growling and resonating sound of one of the Gold Coast’s favourite sons. Sharing many tunes from his latest album Lifeblood including set opener Fear and rousing anthem Keep Me On The Road, punters treasured every moment of Karl’s set with resounding applause.

As night descended, the stage lightshow was in full effect for the band who inspired the creation of Coochiemudlo Island Festival. The Double Happiness graced the stage to share their awesome surf gaze sound with a crowd who shared the moment with dancing and laughter. It was a surreal scene to see these Brisbane beauties bring a great wave of happiness and wholesome vibes to all corners of the island. Leading ladies Meg and Kristin even dressed the part, donning matching jellyfish patterned dresses – an ode to the jellyfish they speak of in their track Coochiemudlo. A delightful spectacle of sound and smiles, The Double Happiness have no doubt cemented themselves as the unofficial-but-official human mascots of the isle.

Rounding out the evening were two incredibly impressive acts in the form of a solo Bobby Alu, and brilliant octet Chocolate Strings. Hands down the highlight of Bobby’s set (aside from his amazing music of course) was when he brought his beloved mum on stage for a boogie – it was a beautiful moment that captured the spirit of what Coochiemudlo Island Festival is all about: sharing good times with those you love. And if you’ve never seen this ukulele-yielding man perform live, we highly recommend you add it to your life’s bucket list – pronto! Chocolate Strings equally pulled at our heart strings with a song dedication to their children that again summed up the family-friendly essence of Queensland’s newest island music festival.

The eclectic variety of the music was magnificently curated and put into effect by the one and only John Russell of 4000 Records. Easily the most seen person of the festival due to his frantic movements about the island to ensure everything went to plan, John’s hard work was well noted and greatly appreciated by all.

Coochiemudlo Island Festival was a raging success not just as a festival, but as a community gathering to support a local scene which has weathered one of its toughest years to date. Amongst the backdrop of iconic festivals such as Bluesfest and Splendour seeing cancellations and uncertainty, being able to share in a small, community focused event that catered to its audience was an experience that rivalled many of its larger counterparts.

Lovingly dubbed Coochella by adoring attendees, there is sure to be even more smiles to come from Coochiemudlo Island Festival in the future.