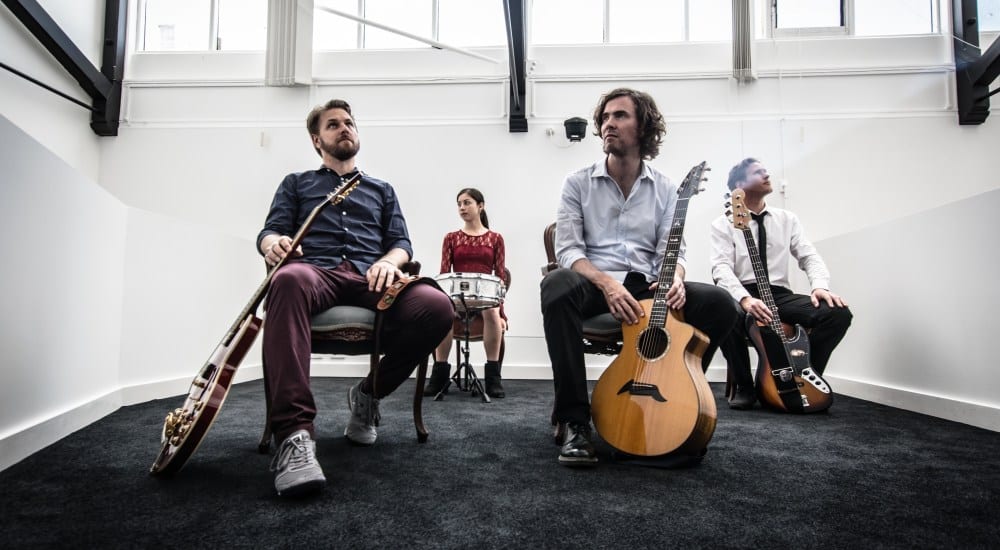 Centred on capturing the key moments in life that we keep coming back to, Elbury’s Haunting Ground, is a nostalgic-laden record.

Described as “super chill,” the band’s first full-length album lends itself to a more alternative, progressive-folk sound than its predecessor, 2015’s Demasquerade EP.

“We started out as a straight-up folk duo, but on this album, we took strong steps into the progressive-folk realm, which influenced our song-writing immensely,” said band member Edward Buckridge.

“Haunting Ground builds directly on techniques that we first introduced in Demasquerade. This time around we also experimented with more sounds outside of our typical instruments, including clarinet, and electric and honky tonk piano, which gave the record a somewhat retro vibe.”

Edward says the lyrical themes have continued along a similar path too, with the tracks on Haunting Ground exploring concepts of reflection and self-examination.

“The songs draw directly on life experiences, mostly little moments that show us a great deal about how our minds work.”

Standout tracks on the record include lead single Like Sirens, the simplistic Aromas and unusually-structured Chaplin which makes some cool references to the silent film era as well.

The four-piece are excited to have a new catalogue of songs, and are looking forward to hearing feedback from their fans. Haunting Ground is available from tomorrow, Monday, 1 May with the album launch at Caxton Hotel on 20 May set to be a full Monty showcase of the band’s abilities

“Our bread and butter as a band is market gigs and small bars, where the production options are limited, so this will be a chance to see Elbury in full flight. We’re looking forward to seeing what Boatkeeper (support act) serves up too!”

Be one of the first to hear Elbury’s new album Haunting Ground via the exclusive stream below, and pick up your copy of the album when it drops tomorrow, Monday, 1 May.