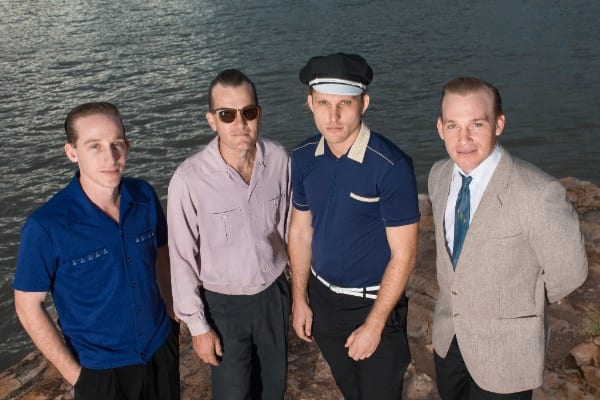 Notorious for never doing anything by halves, Noosa natives The Hi-Boys are kicking off their first European tour today.

Over the next two weeks, these 1950s-inspired rockers will perform in France, England, The Netherlands, Belgium, Germany and Ireland, and play at Bethune Retro Festival, International Vintage Festival and Shake Up Festival. It’s a tour vocalist Scottie Rehbein says will be well worth all the planning.

“We’re stoked to be heading to Europe, it’s a great place to not be categorised as a band or put into a particular scene. The people there just love their music, they get right up front to watch and listen which is always a great vibe to play with,” said Scottie.

“We really can’t wait to play the festivals – with the population being so big over there the crowds get huge and we’re looking forward to seeing people’s responses to our music.”

This tour will be the band’s first international stint since signing with WILD Records in 2014, and follows their recent Australian East Coast tour which wrapped up earlier this month. They’re hoping to learn as much as they can whilst overseas, both onstage and off.

“We’ve got a couple of days off so it will be good to explore some of the cities. We’re right into war history so we’ll be checking out some of the old battle sites and galleries as well as old churches and castles. There’s so much history in Europe it’s unbelievable!”

As for what European audiences can expect to see from these Queensland locals when they’re onstage? A whole heap of energy!

“We guarantee they’ll be a whole lot of movement! Sometimes we get so caught up in the music and end up on our backs just going wild.”

At this rate, The Hi-Boys may soon be Europe’s newest Aussie expats!

Follow The Hi-Boys’ European adventures on Facebook, and if you happen to be in Europe make sure you catch them at one of their upcoming shows!