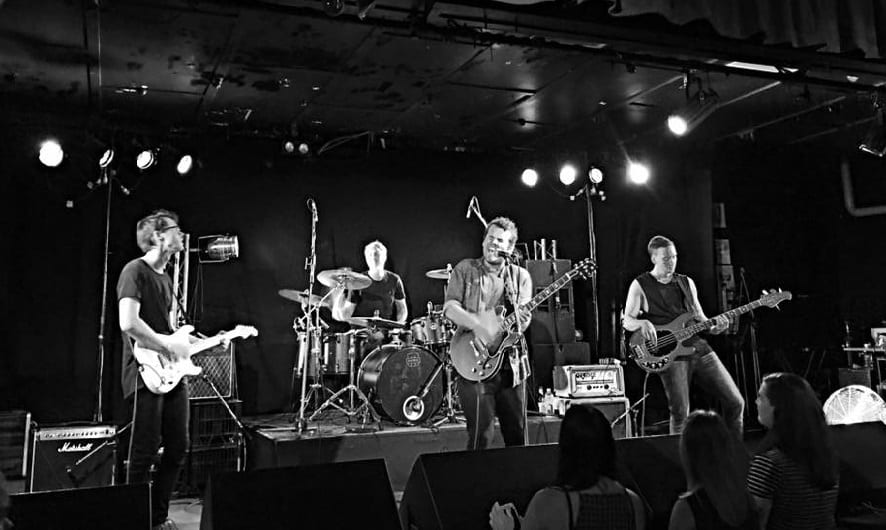 If anyone has landed in the Brisbane music scene with a BANG it’s indie-rockers Gloss. Between playing their first (yes FIRST) gig at iconic music venue The Zoo to finding themselves in the Courier Mail flipping the bird to lockout laws, their entrance onto the scene has been anything but quiet.

The four-piece came together in 2015 as a result of a previous band breaking up, a singer-songwriter’s angst and their joint longing for musical expression. After a few beers for inspiration, their idea to form a band became reality.

“We started jamming on tracks I had previously written as a solo artist and the more we connected the better everyone’s influences started showing. By the time everyone was comfortable, we didn’t have to decide on what type of music we were making, the music was just flowing,” said lead singer, Shaun Evans.

Influenced by artists like Violent Soho, Kings Of Leon, The 1975, The National and Foo Fighters, Gloss’ music covers an array of life issues including love, lust, sex, violence, drugs, alcohol, depression and anxiety.

The band are currently working on their first single Bad Habit with producer Ian Haug (of Powderfinger fame) at Airlock Studios. A powerhouse opening track, Bad Habit is a melancholy, dance ballad about wanting what you can’t have.

“Bad Habit delves into the internal guilt and embarrassment of trying to hide something you can’t help but feel; just nicely packaged in a bright, fast moving, minor-esque ballad.”

While it’s still early days for Gloss, the band do have their sights set on releasing a record which Shaun says will be “big and bold with beautiful production.” For now though, they’re focusing on perfecting their live show, with their next gig lined up for 11 June at Beetle Bar.

“Fans can expect to see four musicians lose their minds to the interpersonal reflection caused by the culmination of drug abuse, sex, violence and love; crafted into an hour of groovy, catchy music.”

“The show will be the perfect amount of punch followed by a nice cool ice pack – you’ll definitely feel what just happened, and that feeling will linger long after.”

This is one fun-loving Brisbane band to watch!

Keep an eye on Gloss’ website and Facebook page for updates, and get along to their show at Beetle Bar on 11 June. More event info available here.